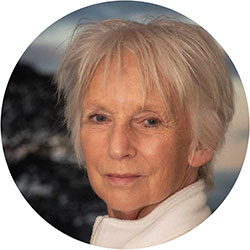 Some 2 years ago, my knowledge of low carb eating was almost zero. Like many, I had eaten what I wanted for years, blissfully ignorant of what it was doing to my physical and mental health.

Well, when the wakeup call came, it was a big shock. I had heart palpitations, was becoming less fit by the minute and was not sure what was going on. With hindsight, I should have listened to the signs before - constant tiredness, feeling as if I need to refuel with food every 2 or 3 hours, not sleeping particularly well, short-tempered - not pleasant at all! Then the palpitations became more frequent and everything became a tremendous effort. I sought medical advice, discovered I had high blood pressure, was given tablets for that and had a permanent heart monitor inserted.

I was scared and shocked at the same time. It was at that point that Estrelita said to me that I should look carefully at my diet, what I ate and drank. Exercise was not the issue as I have a dog and walk a lot anyway although I had experienced a lack of energy and enthusiasm even for that.

Estrelita has a medical research background and had already commenced her studies on the subject of nutrition and had built up a good working knowledge of Low Carb Healthy Fats (Keto). We devised a Low Carb Programme and trialled it on ourselves to see if this offered a solution to my issues.

I started enthusiastically and realised then that it was so very different to my previous eating pattern which had been very frequent small meals and snacks. We are constantly told that it is important to start off the day with breakfast which, for example, could be a rushed toast, low fat butter and jam, or porridge with milk and a few teaspoons of sugar, breakfast cereals and milk, a croissant with low fat butter and jam, all washed down with orange juice, tea and coffee. Then we zoom off to work and by 10.30 we are starving again and need to have a biscuit or two to keep us going til lunchtime. Lunch could be a sandwich, banana, apple juice and low fat yoghurt which would keep you going until 3.30 when you had to have a doughnut which co-workers had brought in. Then off home to maybe a packet of crisps and a glass of wine or a beer, then some Spaghetti Bolognaise for your evening meal. And possibly a snack at 9 pm. Does this sound familiar? Maybe not exactly the same food but something similar and with the same frequency of eating something i.e. every 2 to 3 hrs!

So what did I then do differently? I am sure that is the question you are asking. I should also tell you at this point that I had been told previously to limit my fat intake. Little did I realise at that time how wrong that advice was. The first thing I noticed on Low Carb was the amount of fat you are advised to eat – far more than I had previously eaten.

That was my first stumbling block and could be the same for you. I then discovered that my previous routine of a ‘little and often’ eating plan, coupled with my reaction to the sugar content of carbohydrates with its resultant insulin spikes, is also habitual. So psychologically I felt I had to eat every 2 to 3 hours.

However, help was at hand as the advice given on Low Carb initially is to eat the correct foods until you feel full and then, if you are hungry, to take a small snack of healthy nuts, a piece of cheese, a bullet coffee (with butter) or coffee with cream. That really helped until lunch time! Lunch was a healthy fat protein meal or salad and I found I was satisfied with that meal but again through habit found I was reaching for a snack in the afternoon. I soon learned that a healthy snack was ok .

Then I was not hungry and was able to last until the evening meal. Within days I had adapted to 3 meals a day (from our Programme) and hardly any snacks. I started to lose weight, sleep better and feel much better, particularly mentally as I noticed my mood had greatly improved. I was surprised to see results within the first 2 weeks. And the improvement continued which was a relief.

Over time, I was able to adapt to Intermittent Fasting which is to eat meals within an 8 hr window and to fast for 16 hrs. This would have been completely impossible before as I would have been ravenous and in a very bad mood. We call it hangry! I now find that I can have a late breakfast/early lunch, perhaps a small snack in the afternoon and my evening meal within the 8-hr window and then nothing until late the following morning. I never have hunger pangs now.

So, what do I eat? Good quality meat, fish, cheese, Jersey milk, full fat dairy, natural unflavoured yoghurt, healthy olive oil and coconut oil, loads of green leafy veggies and berries. Our meals tend to be one pan cooking (which is great and convenient) with simple easy to prepare recipes (which everyone says are so easy, nutritious, flavoursome and healthy).

Is there anything I miss? Honestly, no there is not. I have found that, by educating myself as to what is healthy for my body, I am able to resist all temptation to anything that I might have chosen previously.

And the end result is I have lost weight, feel better than I have done in 20 years with the true benefit being that I am off all blood pressure medications. Knowledge is king and life is good!